What to say to different personality types 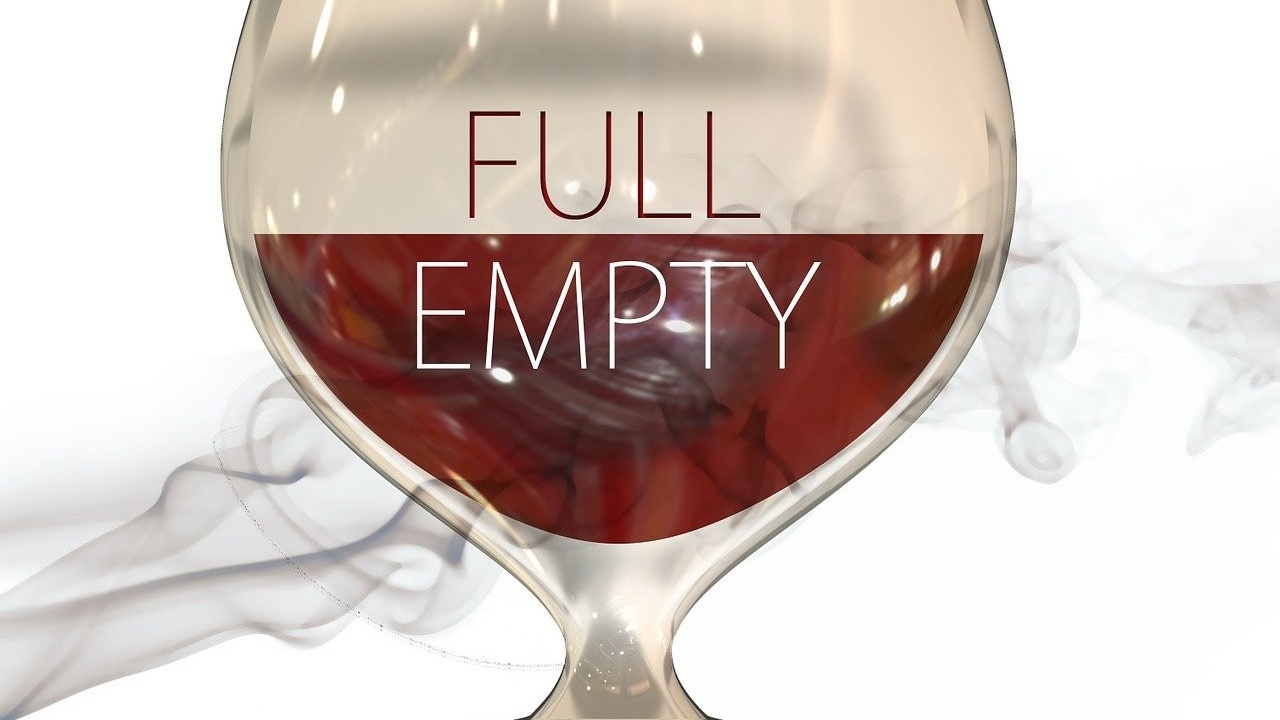 There’s a truckload of research on how best to frame messages to appeal to your audience.

For example, ads that are framed positively work best for people who are promotion-focussed – in other words, they seek to maximise the probability of obtaining a positive outcome (Lee, Liu and Cheng, 2018).

This was true regardless of whether the product was hedonic (like a massage, or holiday, or aesthetic attributes of a product like a laptop’s design) or utilitarian (think calculator, car wax, suitcase, or functional attributes like a laptop’s battery life).

For these people you can talk about the benefits they’ll enjoy and what they’ll gain (e.g. relaxation or long battery life).

It’s a little more nuanced for those who are prevention-focussed.

These people:
• Prefer to avoid negative outcomes than seek positive ones, and
• If the product is hedonic, respond more favourably if the ad is negative (probably because it assuages any guilt they may feel). For utilitarian products, positive works best.

This is all very well.

But the question is, how do you know what type of person you are dealing with in the first place?

If you are sending an email to someone, having a meeting with a group of stakeholders, or conversing with a customer, how can you determine whether to talk the benefits up, in a positive frame, or instead talk about avoiding downsides?

Is prevention or promotion focus hard-wired?

The first thing we need to work out is whether people are inherently prevention or promotion focussed. Is it a stable character trait or does it depend on the context?

The body of research to which this relates is called “Regulatory Fit Theory”, first coined by Tory Higgins in 1997 (PDF). In short, people are either geared towards accomplishment and aspiration (promotion focus) or safety and responsibilities (prevention focus).

First, there’s those that study regulatory fit as a “chronic” condition. Sounds ominous, but really it just means a set way of seeing the world that has been developed since infancy through socialisation and culture.

The second camp studies regulatory fit as a malleable, temporary condition. In other words, context changes how we respond.

So which is it? Stable or situational? The jury’s still out.

I tend to think of it this way.

People have a natural inclination to be either prevention or promotion focussed, and this can be amplified or dulled by context.

Our job is to tune into any clues about whether someone is prevention or promotion focussed and frame our message to maximise its impact.

How to pick if they are prevention or promotion focussed

So how do we work out someone’s regulatory focus so we can adjust accordingly? What clues should we look for?

One way is to get people to complete the “Regulatory Focus Questionnaire”.

But let’s be honest. Unless you’re in a lab, this ain’t practical.

Instead, here are some characteristics to help you identify someone’s type, inspired by “Focus: Use Different Ways of Seeing the World to Power Success and Influence”. 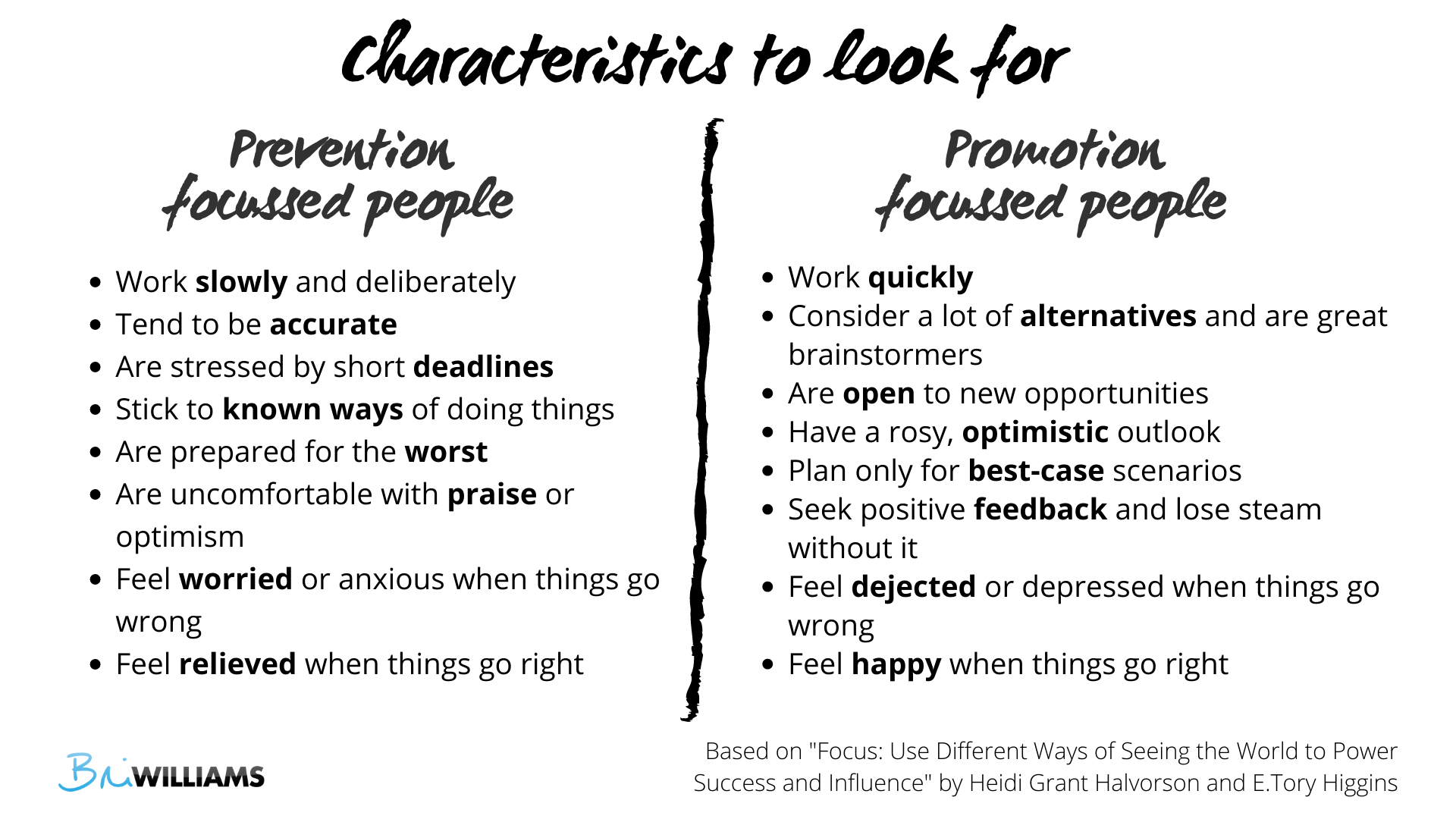 Do you identify with one or the other? Judging by this list I’m a raging prevention-aholic!

How to talk to people according to their regulatory focus

Once you get an idea of what a person’s regulatory focus may be, you can address them in a way that maximises their sense of compatibility. They’ll be more likely to be persuaded by your message if it ‘fits’ with their style.

You can likewise adapt messages about your product according to whether your target market is prevention or promotion oriented. 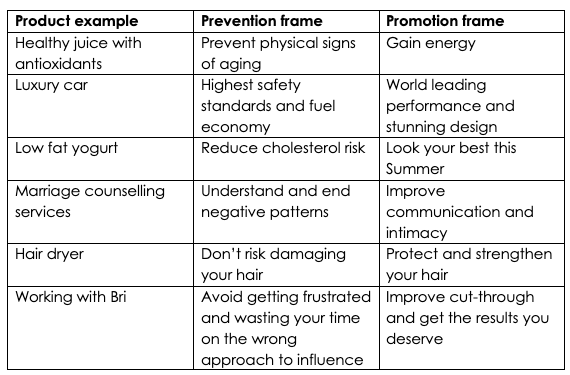 If all else fails, and in situations where you can’t pre-determine what the regulatory focus on your audience is, here’s my suggestion.

To play the odds, lead with the positive rather than negative, especially if your product is utilitarian.

There are two reasons I say this.

From there, you can hedge your bets and supplement a positive framing with some negative messages as well.

Written by Bri Williams with research support from Bora Ergor.