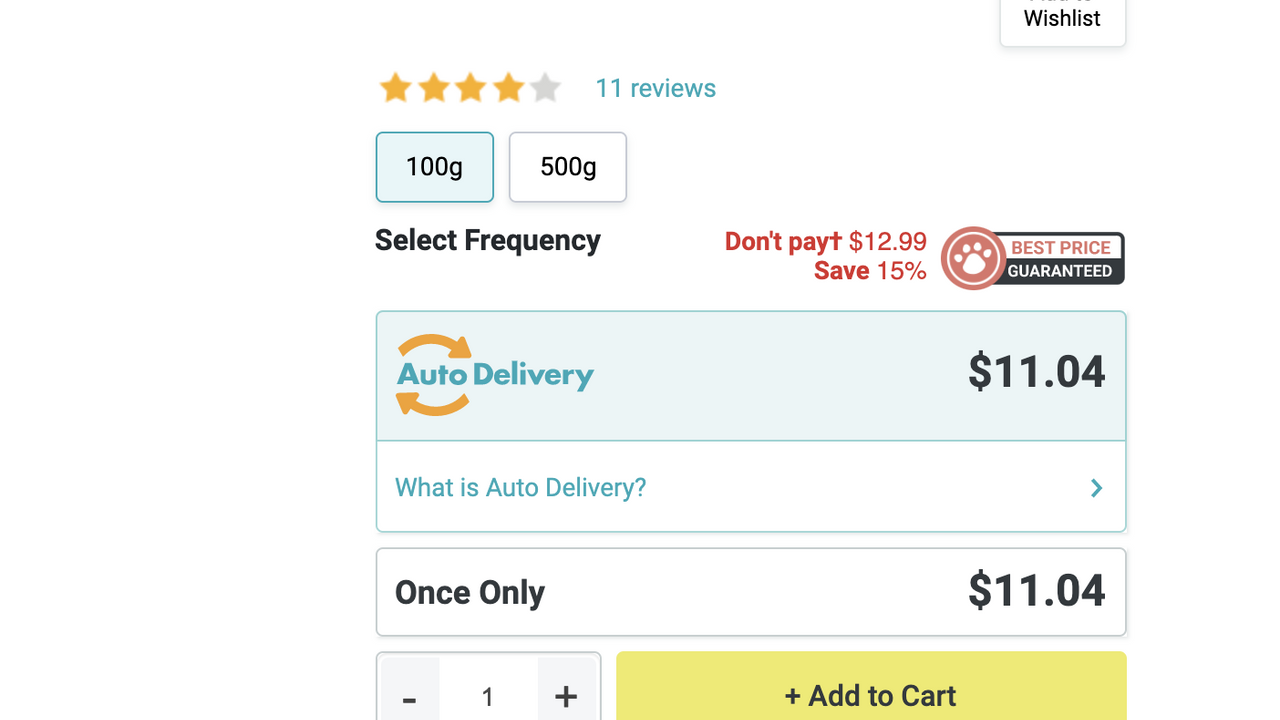 What do you think of this?

It’s the product order page for a pet supplies website.

More specifically, what do you think about the auto delivery being defaulted?

Well, from personal experience I can tell you it is difficult to recognise you are committing yourself to auto-delivery and this inadvertent decision only occurs to you when boxes of Chicken Breast keep appearing on your doorstep.

So, is this business manipulating its customers?

It’s an important question and the criticism most often levelled at practitioners of behavioural science. If you know how people make decisions - that people are lazy, scared and overwhelmed - then you can take advantage.

Business is about finding ways of doing things more effectively and efficiently, and that’s what behavioural techniques offer. But here’s where the definition of manipulation becomes interesting.

The Google dictionary describes being manipulative as “exercising unscrupulous control or influence over a person or situation”.

Behavioural techniques do not need to be, and should never be, coercive or dishonest, and they do not control people. Your customers, staff and stakeholders always maintain agency over their decisions so this definition doesn’t really fly.

Dictionary.com defines manipulation as “influencing or attempting to influence the behaviour or emotions of others for one’s own purposes”.

I can definitely see how behavioural techniques can fit this statement, but if your purposes align with those of your customer (I have a product they are willing to buy, for example), then you have a win/win situation.

And even if this definition read “for one’s own purposes alone”, or even “to the detriment of another”, the behavioural techniques I teach would be excused. It’s not the tools that are the problem, it’s the person using them.

Lastly, the Collins dictionary suggests that “if you describe someone as manipulative, you disapprove of them because they skilfully force or persuade people to act in the way that they want.”

I think this gets to the heart of manipulation because it is about how the customer feels about what’s happened to them. If they feel they have been unfairly pushed or persuaded, then they will of course feel aggrieved, and that’s not what behavioural techniques are designed to do.

That’s why I disapprove of the way the pet food store has designed its default purchase. I feel aggrieved. I feel manipulated into committing to something I hadn’t intended.

Which is why a new study caught my eye.

Nudges should not be feared, by you or your customers

In “Experiencing default nudges: autonomy, manipulation, and choice-satisfaction as judged by people themselves (2021)”, researchers Michaelsen, Johansson and Hedesstrom tackle how (and whether) the way choices are presented impacts customer autonomy.

Up to now, researchers had probed the sticky issue of whether nudges were seen as manipulative through largely theoretical means.

In other words, asking people what they imagined they’d feel in a situation.

What’s different about this research is it asks people who were ACTUALLY nudged towards a decision.

In two of three studies, participants were asked to think about renting an apartment. They were then presented with one of three sets of paperwork.

The researchers were interested in how the presentation of choices impacted both the choices made and how people felt about making those decisions.

They found that those who were defaulted into the green appliances were much more likely to rent them. For example, those who were opted-in took 7 green appliances compared with only 4 if they had to opt-in or self-select. This is consistent with other research on the power of defaults (and why the pet company has designed its site the way it has).

But, perhaps surprisingly, these people did not report feeling less autonomous or less satisfied with their choice. This held even when they were told ahead of time the default could impact their decision.

Then, to test whether real money impacted how people felt, the researchers created a third scenario.

In Study 3 people were asked to choose between donating a bonus payment to charity or keeping it for themselves.

No surprise. Again, those opted-in were twice as likely to donate than those who had to opt-in.

They were also reported feeling no less satisfied or autonomous than people in the other choice conditions. They did feel their freedom to choose was slightly more under threat, but it was still on the low scale.

According to the researchers, “participants were able to detect the attempt at influence, but, on average, did not mind this happening.”

Where does this leave us?

There is no question that how choices are presented can and will influence your customer. What you set as the default will have a significant impact.

Again, from the researchers:

“In three experiments, we found consistently high reports of experienced autonomy and choice-satisfaction, and low levels of perceived threat to freedom of choice. Increasing the transparency of the nudge, or the stakes of the choice, did not change this pattern.”

Further, “despite concerns of intrusiveness expressed by people in survey studies, we find that common applications of defaults can be consistent with autonomous decision-making, as judged by people themselves. We note, however, that there is a risk of people perceiving the default as trying to influence them, which under some circumstances may lead to reactance.”

And finally, “our results suggest that default nudges are less manipulative and autonomy-infringing than sometimes feared.”

1. The benefits to your customer should outweigh the cost

If the research says people are cool with defaults, how do I square this with my reaction to the pet supply company?

The research didn't delve into a scenario where the customer was worse off. As they themselves note, it's hard not to feel okay about donating to a charity. Committing customers to automatic delivery of chicken breast, however, is harder to justify.
I believe the best course is the prudent course. Default customers to the most-likely-to-be-positive-for-them option.

With great power comes great responsibility. Use defaults because they work, but make sure they work for your customer.

If you want a better business, use behavioural techniques. If you customer has nothing to fear, neither should you.