Fraud and failure. It's been a rough couple of weeks. 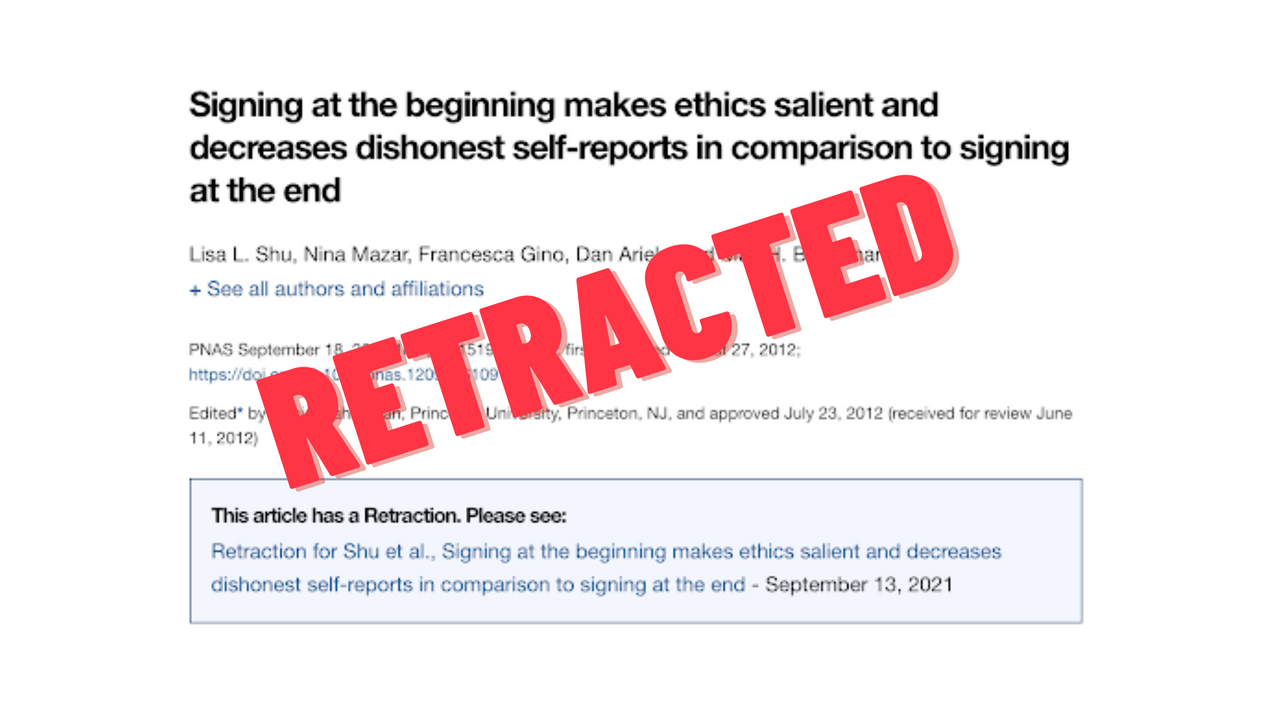 The field of behavioural economics has been knocked around a couple of times over the past week or so..

Perhaps most significantly, news broke of a research study on fraud being found to have used fraudulent data. Yes, painfully ironic.

The 2012 study by Shu, Mazar, Gino, Ariely and Bazerman found getting people to sign their name at the top of a form rather than the end increased the likelihood they’d complete the form honestly.

Such an interesting finding doesn’t stay quiet for long, and the broader behavioural economics community, me included, took delight in sharing its application.

One of the studies used data from a real-life insurance company who collected customer car mileage. Turns out, the data was iffy.

Four of the study’s five authors did not have anything to do with compiling or analysing the data. That leaves Dan Ariely (he of Predictably Irrational fame and the man I credit with my move into behavioural economics) as the author in the hot seat, accepting responsibility as the conduit between the insurance company and the research team, but not admitting to knowing the data were dodgy.

The second, and strangely affirming news about behavioural economics regards the efficacy of “regret” lotteries to drive vaccinations.

In short, they don’t seem to work.

Why is this affirming?

On paper, regret lotteries are an attractive proposition to encourage people to get vaccinated against Covid-19. Everyone who gets the jab goes into a draw for a prize payout (up to $50,000 in some jurisdictions, $1 million in others). Everyone who isn’t vaccinated sees this and decides it’s enough to get them over the line, and they get vaccinated too. They don’t want to live with the regret of missing out on the money.

“I kept hemming and hawing about it, and I work all the time, and when the Vax-a-Million thing started I immediately went down there and got it. It pushed me over the edge.” - Jonathan Carlyle, Vax-a-Million winner, The Cincinnati Enquirer

And early indications for Ohio’s Vax-a-Million - the first such lottery - were positive, with an estimated 50,000-100,000 additional doses administered in the first two weeks (Brehm, Brehm and Saavedra, 2021 PDF)

But a couple of subsequent papers, one in Philadelphia and the another in Ohio (pre-print) have indicated the impact on vaccine take-up is marginal.

“Despite being very appealing for a number of reasons, the evidence for the effectiveness of lotteries for incentivizing COVID-19 vaccination is pretty mixed.” Researcher David Lang.

Now, this could be seen as a failure, that lotteries were a waste of time and money. An easy criticism to make.

But instead, this is exactly what (behavioural) science is all about. Form a hypothesis, test it, learn from it and see how the lessons can be applied. We get better as we understand what does — and doesn’t — influence behaviour.

The healthiest way to think about behavioural science

When it comes to behavioural science, I think we should see it as instructive, not prescriptive.

It's no silver bullet. The onus is on us to understand the research and then consider OUR context and OUR circumstances.

What it can do —and very well — is help us think about what we could do and discard ideas that have a lower likelihood of working in favour of those that give us the best chance of success.

That’s the philosophy underpinning my approach, and my two online programs in particular.